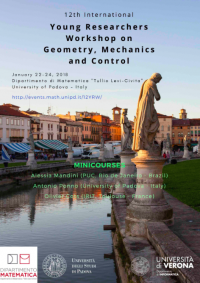 The core of the workshop consists on 3 mini-courses, each of 4 hours, which serve as an introduction to different topics related to geometric structures in mechanics and control theory. The courses will be at PhD/postdoctoral level.

Along with the courses, there will be contributed short talks (30 minutes) and a poster session. Attendance is, of course, open to anyone, but in particular young researchers (PhD-students, recent PhD's) are encouraged to attend the workshop and to submit a talk or poster proposal.

- Antonio Ponno (University of Padova, Italy), Introduction to Hamiltonian PDEs: an overview of models and methods

Deadline for submitting abstracts for short talks/poster: November 30, 2017.
Send title and abstract to 12yrw@math.unipd.it. Only a limited number of short talks will be accepted. The scientific committee will select them after the deadline.