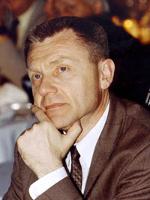 Jean-Pierre Bourguignon was educated at the École Polytechnique, and Paris VII, where he took his Doctorat d’État under the direction of Marcel Berger. His mathematical work is in the field of differential geometry, especially in geometric variational problems related to mathematical physics and the study of Ricci curvature. Working for the Centre National de la Recherche Scientifique he has been Director of the Institut des Hautes Études Scientifiques in Bures-sur-Yvette since 1994, while keeping a position as part-time professor at the École Polytechnique. He was awarded the prix du rayonnement scientifique by the Académie des Sciences de Paris in 1997, and was made an honorary member of the London Mathematical Society. He is a member of the Academia Europaea and of the Royal Spanish Academy of Sciences. His indefatigable work for the mathematical community includes writing beautiful survey articles, the co-authorship of films, involvement in national reviews of mathematics in Canada, the UK, Portugal and Australia, and putting the case for mathematics to the political establishment.

Collaboration with Zentralblatt MATH gained importance with the setting up of a joint website (EMIS) and the electronic library. The EMS gained observer status in the International Mathematical Union. The Society organised Diderot Mathematical Fora, sponsored EMS Lecturers, and held 2ecm in Budapest. Council approved the decision to found the Journal of the European Mathematical Society, to be published by Springer, who would also publish the Lecture Notes of each EMS Lecturer. A subcommittee was formed to support mathematicians in eastern Europe, and the Society engaged in preparations for World Mathematical Year 2000.